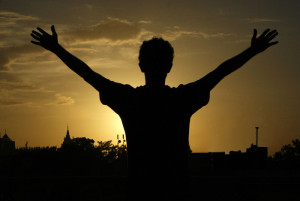 I had just left an eight-week silent meditation retreat in Lumbini, Nepal and was sitting patiently in a local shop with a Nepali man named Jupiter.  He was halfway chatting with me, halfway filling out my bus ticket to Varanasi, India.  Midway through, he paused and looked at me with a curious glance before asking, “are you always like this?”

I smiled, a little confused, thinking maybe he was referring to the large beard I had grown in two months of no shaving; I said, “do you mean my beard?”

“No, I mean how peaceful you are.”

“Oh….  Well, I’m generally a pretty tranquil guy, but I just got out of a meditation retreat, so probably more than usual.”

By the end of the night, I was on a horse carriage riding through the streets of Varanasi, a twinge of novelty in my eyes while roaring with laugher over the chaos of Indian nights—the horns and lights and street dogs and glitter-like colors in every which direction.

A few days later, I sat by myself in a four-table restaurant eating a big plate of masala curry.  A Japanese man sat in the table next to mine, and we embarked on a long and winding conversation about the experience of happiness.

In the mornings, I did yoga, meditated and wrote for a few hours unless, of course, I didn’t want to—oh, the fluidity of the traveler’s life!

At that point, I had been on my spiritual journey for around a year—roughly half on retreat or living at spiritual centers, and the other half backpacking across three continents.

I didn’t see it at the time, but the first year and a half of my journey was essentially testing out the two types of freedom:

1) Outer freedom—or, the ability to do whatever we want.

After planning for a few years, I managed to start my journey with a decent amount of savings and absolutely no real world obligations.  Likewise, I wasn’t aimlessly traveling—I already knew what I enjoyed doing, and my open-ended period was to give me the “freedom” to just do that, with nothing holding me back.

This type of freedom is how our culture universally defines freedom.  Lots of money.  An open schedule.  No governmental, familial or other social restrictions.  The ability to do whatever we want.

2) Inner freedom—or, not wanting this moment to be other than it is.

Amidst that two month meditation retreat in Nepal, I was unable to read, write, watch movies, talk, use the internet, exercise, eat other than what I was served, and on and on.  Basically, I had put myself in a 14-hours-a-day-of-meditation container where I couldn’t do anything else that I wanted.

And yet, I felt a profound sense of peacefulness and contentment.

This wasn’t because my environment was really nice or I was having a great time—hot season in Nepal is actually pretty unpleasant—it was because I was diving deeply inwards, noticing all my inner obstacles until I found a place of okayness, even with mosquitos in my ears and sweat drenching my clothes.

This is how spiritual traditions define freedom—not wanting THIS MOMENT to be other than it is.

Note: it’s a common misunderstanding that this means you give up goals and aspirations, and you sit around doing nothing—the reality is that you can move in a direction while still being totally accepting of this moment.

How exactly do these two types of freedom play out in everyday life?

After having spent over four years living and traveling abroad, and over two years on intensive meditation retreat, I can say that I find both freedoms to be very valuable.

All in all, I’m a huge fan of outer freedom.  There’s a reason why it’s such a strong cultural and human value.

However, I think of all the travelers I met who were looking to sex booze drugs adventure novelty and stimulation, only masking their deep existential void.  I think of all the stories of unhappy millionaires.  I think of America, the land of “freedom,” and its astronomical rates of depression, medication, suicide, plastic surgery, materialism, violent crime and drug abuse.

Add all that to my own personal experience, and I come to a very deep conviction that while outer freedom is very nice, it’s only a fraction of the goodness that’s offered by inner freedom.

Since ending my spiritual journey, it hasn’t always worked out for me to have “free time.”  Many years ago, this sort of thing would really irritate me.  Now, I’m still not always perfectly content, but in comparison, I’m about a 100 times less irritable than I used to be—what a relief!

I’ve learned how to go with the flow, and either release the desire for THIS MOMENT to be different, or to take action for change.

I’ve learned how to respond to my thoughts, sensations and emotions rather than react from them.  This essentially means I have more choice.

Notice the depth to which you can (1) notice them and (2) relax into them, being totally content and at peace with whatever it is.