My primary lineage is the Theravada-Vipassana Buddhist tradition, particularly as passed through the Burmese monk Shwe Oo Min Sayadaw to his successor & my core teacher, Sayadaw U Tejaniya. 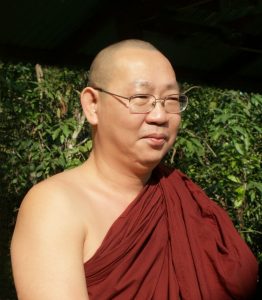 Sayadaw U Tejaniya began his Buddhist training as a young teenager in Myanmar under the late Shwe Oo Min Sayadaw (1913–2002). After a career in business and life as a householder, he became a permanent monk in 1996 at the age of 36. He now teaches meditation at Shwe Oo Min Dhamma Sukha Forest Meditation Center in Yangon, Myanmar.

His style is marked by a relaxed demeanor and easy sense of humor that belies a commitment to awareness which he encourages his students to apply in every aspect of their lives.  Here is a four-page autobiography he wrote in the mid 2000’s (starts on page 26).

Also within the Theravada tradition, my practice and teachings are greatly informed by:

Earlier in my spiritual journey, I also spent time immersed in Soto Zen Buddhism, classical Yoga, and Advaita Vedanta.  While I’ve found a spiritual home with Theravada Buddhism and don’t actively study or practice these traditions anymore, they have certainly informed my sensibilities & the ways I relate to the dharma.

What is Theravada Buddhism (and Vipassana)?

The first ~200 years after the Buddha died, there weren’t different schools & sects of Buddhism.  There were just followers of the Buddha.  However, once different schools broke off, eventually forming Mahayana & Vajrayana Buddhism, among others, the original group that remained intact was called Theravada, or “the way of the elders.”  Over the past 2,000+ years, this lineage has maintained a continuous presence and nowadays is the dominant tradition in Thailand, Sri Lanka, Myanmar, Laos, and Cambodia.

Vipassana is its style of meditation that focuses on developing wisdom, and is typically translated as Insight Meditation.  This style is often paired with samatha meditation (aka concentration or calm-abiding), and together these two form the core of the Theravada meditative practice.  They are both rooted in mindfulness.

Although, a better term than vipassana to describe what I do would be Satipatthana meditation, which refers to the discourse where the Buddha laid out his basic meditation approach, enveloping both vipassana and samatha.  One of my favorite all-time books beings with a translation of the 10ish page discourse, and proceeds to break it down in-depth.

If you’re interested in a deeper dive into all this, this article by Gil Fronsdal offers a fantastic overview of Theravada Buddhism.  I also wrote a short article describing the essence of Vipassana.