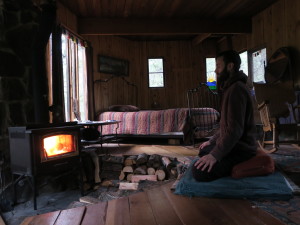 I’ve previously written an in-depth guide to meditation retreat — why do it, where to go, and what to look for in choosing one.  Today, I wanted to give an inside look at my recent retreat.

I spent three weeks by myself in a rustic cabin deep in the Cascade-Siskiyou Wilderness, devoted to the practice of Vipassana meditation.

On an outward level, here’s what it looked like:

On an inward level:

When I got back home, someone asked me if I enjoyed myself during retreat.  For me, this is always a strange question, as I’ve never found meditating to be about enjoying or not-enjoying.

In other words, my intention is not to feel good, attain glorious meditation states or have a good time.  Instead, my intention is to maintain steady effort, apply myself wholeheartedly to the practice, and develop understanding, self-learning, and a deeper insight into my patterns, ultimate truth and how to live with deeper ease, connectedness and wisdom.

On this level, it was very fruitful!

This retreat, perhaps the most enlightening thread was brushing up against deeply engrained patterns of aversion — at times, not wanting to get out of bed, not wanting to sit, not wanting to exert any effort at all!  These are the same things that lead to procrastination and complacency in my real life.

I got a chance to let myself down, see on a very subtle level the internal chain reaction that follows.  Say, oversleep –> recognition of oversleeping –> judgement of not being able to keep intention –> emotion of frustration –> bad mood –> impulses to disassociate –> despair … all in a matter of seconds!

I got to see when this would happen, and when it wouldn’t.  Examining contrasts.  When was I fooled into identifying with these mental-emotional states, and when could I see through them?

The more closely I could see the mechanics of my conditioned reactivity, the less hold it had over me — the more inner freedom I found at each chainlink, and a greater ability to choose a new path!

Since returning, it’s not like my reactivity has been permanently eradicated and that I’m now a perfectly focused and directed individual.  And yet, there has been a noticeable shift.

I’ve experienced less complacency (emotionally) and procrastination (behaviorally) than my baseline.  Something about the conditioned pattern was re-wired, to a degree.  And, perhaps even more importantly for going forward, it’s mechanics are a little more visible, so there remains a heightened sense of choice.

But what about the grand insights into impermanence, suffering or emptiness?  Yes, yes, yes.  That’s all in there, and at times can be quite dramatic, but I increasingly find that stuff to be the most mundane of all!  It’s just the way it is!

But what about the joy, the gladness, the bliss?  Yes, yes, yes.  That’s all in there too, but it comes and goes and is much less interesting to me than the sweet taste of gentle equanimity – where thoughts, feelings and sensations increasingly flow through without grasping or aversion.

I leave retreat grounded in the heart of practice, enlivened, and excited to share, connect and explore more and more what it means to turn the dharma into a lifestyle.

As an accompaniment to the photo at the top of the post, I wrote the following poem: