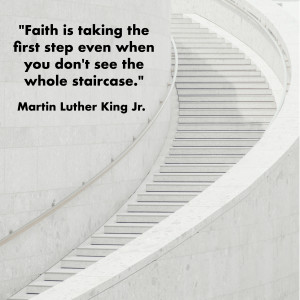 The Buddha often stressed the importance of saddha, stating that it’s the absolute foundation of applying yourself to anything worthwhile.  As most Buddhist literature has been translated by people deeply entrenched in judeo-christian vocabulary, saddha is generally translated into English as faith—a term usually means believing in something even without rational proof.  This can certainly be an admirable quality, but it’s not even the right conversation.

A better translation of saddha would be conviction, not so much a thought-based position (aka a belief), but rather a movement of the heart towards action.

In other words, conviction doesn’t mean we sit around thinking something.  It means we’re called to act on it.

On a grander level, if we have a strong conviction towards, say, living harmoniously, we actually live it.

Maybe we do sitting meditation every morning.  Maybe we clean up our diet.  Maybe we shift from spending time with friends who represent the “old us” and towards those who connect with the “new us.”

Maybe we de-clutter our schedule, taking the risk of going against society’s message to be crazy busy, achieving, producing, attaining and, instead, make more time for simple moments with ourselves, our friends and family.

There are so many possible ways of acting on our deepest convictions.

However, while the term saddha can apply to virtually anything, in the context of Buddhist practice, it’s invariably paired with wisdom.  In other words, people like Hitler and Mao undoubtedly had great saddha, but they were also horribly deluded, and then caused incredible amounts of suffering.

The Buddhist flavor of wisdom essentially refines our sensitivity to which actions/thoughts/beliefs causes happiness and which ones causes suffering, both in ourselves and others.  But even if we understand that on an incredibly deep level, if there’s no saddha, we won’t do anything about it!

Saddha and wisdom are often said to be like the two back wheels on a chariot.  When they are in balance, you can go quite deep on the journey; but, if one is very underdeveloped and the other is very strong (or both are weak), you will have a rather lumpy or non-existent ride.

In any case, the whole point of this article is largely to think about “faith” in a new way – one that doesn’t mean blind belief, but rather implies a sense of conviction that leads to real action.

What do you feel great saddha about?  What are you really putting your heart into these days?  A relationship, your work, adventure, art, distracting yourself, comfort, etc.?